…these were the words that stayed with me as I left my doctor’s office a few weeks ago.

I had to keep repeating it in my head since it was so profound, so mind blowing, so true. I did not want to lose the sense of wonder of this eureka moment.

Of course, I always knew that work is supposed to be just that, WORK….. but the fact that it was uttered out loud made it so earth shattering.

“People underestimate the power of having a hobby.  Find something you enjoy. But don’t overthink it.”

Well, I like running…but somehow, I would not consider it as a hobby.

Well, I like painting…again, I did not feel as it qualified.

I thought that it should be something I can sink my teeth into and actually enjoy learning something new.

To make a long story short…I did discover that I like doing little home craft projects. Peter had some cedar planks and some travertine tiles left over from when he built a sauna for me in the basement.  I thought I could make something out of them.

First, I had plans for the cedar planks to make it into cedar planters.  Would be a nice addition to my garden in the spring.  However, Peter did not trust me around power tools.  He did say that I should just give him the dimensions so he can cut it down to size for me.  I did not like the sound of that since he will likely end up doing all of it.  It’s supposed to be my hobby .

So I until I know how to maneuver around with a jigsaw, I had to revert my focus on the tiles.

After a bit of research, I found out I had travertine tiles.  I also found out that the Romans used travertine to build the Colosseum. Cool, huh?!  Last but not least, I found that I really liked how heavy, how solid these tiles felt in my hand, and that each tile is different with its own unique holes, textures and colours.

I also realized that it would be a good way to practice mindfulness. Especially for a recovering perfectionist, I had to get used to the idea that “it is what it is”. I cannot change the holes in the tiles that I felt were too big, too small, or in the “wrong” place.

So, these past few weeks, I have been dabbling with these tiles with different techniques of transferring ink to stone, experimenting how one type of ink responds to heat, to moisture, to everyday use ( I’m trying them out as coasters).

Here are some of my favorite pieces.

This vintage bike was inspired by a good friend who rode her bike to work each day.  I once confessed that I fear for her life all the time since she had to share the road with people whose main concern was to somehow trick the “traffic gods” and not hit a red light!  At least with this type of bike, no one could ever say…”I did not see her!” 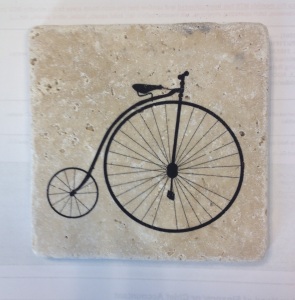 This next piece was inspired by another good friend who I thought played the violin.  So when I told her I had her in mind when I was making this tile, she looked at me curiously and said “Debbie, I don’t play the violin…I play the flute!” I got a hearty chuckle out of her. I’m sure she will never let me live that down. Maybe the next time, I will make a coaster with a flute!

I love owls.  Perhaps because my middle name is Minerva.  She is the Roman version of the Greek goddess Athena, the goddess of wisdom, trade, art, and strategy/war.  She is always associated with her sacred animal, the owl.  Someday, I hope to visit Greece and check out the Parthenon, Athena’s temple.  I think I would have to wait until the economic crisis in Greece gets better…. 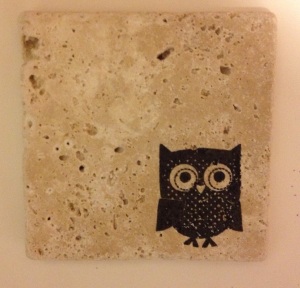 So, I have been busy these past few weeks in a creative mood.  Working with these tiles have been partly frustrating due to the fact that sometimes the combination of ink, acrylic, gel and stone does not turn out to be what I expected.  Although, I am getting better at not being too judgmental and critical…

I am getting better at saying “Meh…..no biggie.”

Have a good weekend, everyone!

I finished a painting yesterday and I realized as I cleaned my brushes that I seem to always come up with a painting when I have one of my major anxiety attacks and relapses.  I reset.  I paint.

So, here are some of my paintings that I have accumulated over the years (yes…YEARS…sad but true).

This is one of my favourite pieces.  I remember agonizing over whether I had too much blue…it seemed so cold, so sad.  I was planning to paint a daisy…something with yellow, something that whispers of sunshine and happy days ahead…instead, my hand seemed to gravitate toward BLUE.  So, here is it…no yellow in sight.

2013 also had a relapse…and a painting.  So, back I went to the art store and purchased a bigger canvas.  I was determined to have something that I could look at and say, “Yes, that brightens up my day and everything is going to be OK.” Instead, I again seemed to gravitate to darker colors and darker moods.  I remember it was the middle of summer and I just wanted to crawl into my proverbial cave and close my eyes and hoped I would feel better when I do open them.  I wished it was winter.  At any rate, here it is.  Eyes closed and a scarf to keep me warm.  Still no yellow in sight.

This is the biggest piece I have ever done. My husband actually had to make this canvas for me since they don’t sell this size in your normal art store. This was a painting inspired by an accountant turned artist, Jonah Calinawan ( incidentally, also my brother!).  His work discovers the endless possibilities of choice, destiny, and identity using a 19th century printing process called cyanotype–which gives his images a deep blue color.   You can check out his work at  amillionsuns.com.  As I was doing this piece, I was thinking that life is not really black and white, that we have a choice in making our lives happier, that our outlook in life can be more positive… if we want it to be. I used to scoff at these sayings like “choose happiness”. Very cliche and I roll my eyes. But you know what, there was something to be said for making that choice that “Hey, I can do this.  I choose to be happy, I choose to have a more positive perspective.”  Of course, there were days when it just seemed so hard to get out of bed when I felt storm clouds in my head and I did not want to move a muscle for fear of letting all my inner demons come out and dance in the rain. (Laugh).  I found this was when my mindfulness practice helped me the most. In this painting, I finally had to courage to use Yellow!

So, perhaps, this is why this recent setback has really shaken my resolve.  I was on a roll and I was doing fine (or so I thought), then boom!  Episode in the stairway (see my previous post “May 21, 2015“).

This is my most recent painting and from  looks of it, I am getting more comfortable with using more “happier” colors.  This set back has been brief ….maybe because I just needed a quick little reminder  to “pause”.  Oh, I forgot to mention that I have gone back to work this past week…slowly integrating back…a few hours a day.

I will leave that story for another time.

At any rate, I look at my paintings over the years and while they were made during difficult times,  I am glad I made something beautiful out of it (or so I think anyway!) .

I am also realizing that at the rate I’m going, I will be running out of wall space pretty soon!