I shouldn’t have gone to work today. I was off kilter, off balance, off centre…just off.

“Deb, if I were American, I would vote for Hillary but I believe Trump will win because we should not underestimate the power of the blue collar….we are not all doctors, lawyers or accountants, or read the New York Times, or have an education past high school.”

I recall that I actually wanted to retort back and say…

…Hillary will win. She is the better candidate.

…History will be made.  Madame President.

….Remember when Justin Trudeau (our Canadian prime minister) said “Because it’s 2015″ when someone asked him why his cabinet has an equal number of men and women?

…It’s 2016 and we have LGBT washrooms, same sex marriage, women’s rights have made great strides;

…there is no room for someone like Trump who will set our American friends south of our borders back 100 years….”

Yet, it seems the American people were not in the same wavelength as I was. Along with the rest of the world, I turned out to be wrong and my husband was proven right…partially.

Wow…the words “racists, “white supremists”, and “bigots” came to mind when I saw this statistic…

On the way to work, I was in a daze ( I even let in a familiar looking white Honda Fit into my lane –read my previous blog please).

I got on the train and started texting friends and family trying to figure out..WTF?!?

Some snippets of conversation during the ride to work echo the fear and panic (my comments in blue): 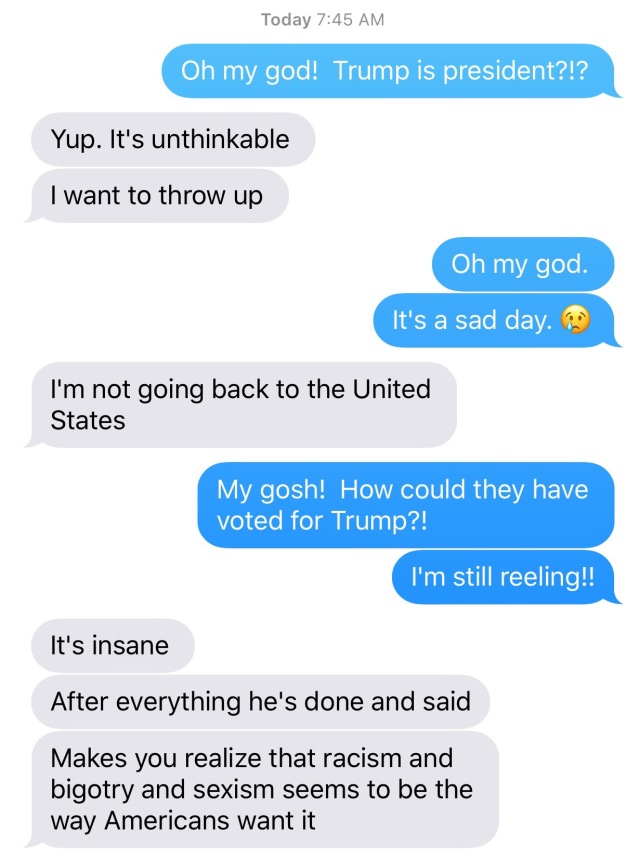 Even though I am Canadian, I don’t think we will escape unscathed…

I even fear for my visible minority friends living in the US: 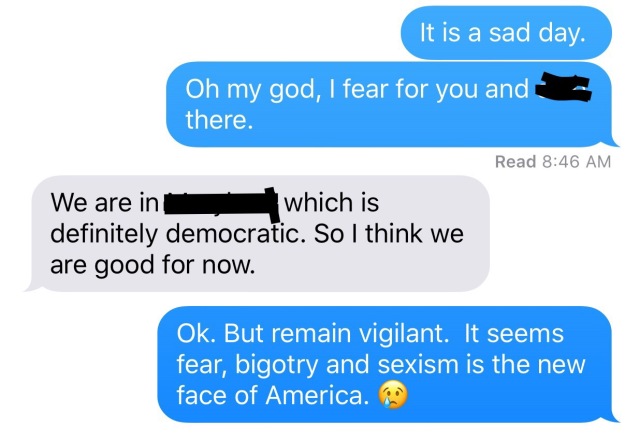 My mindfulness practice was tested today as I went back and forth between disbelief and anger. My mediation session was difficult…chaotic thoughts of how people could have voted for a bully, a con man, a sexual predator, a liar, and the list went on and on and on…WTF?!?

Don’t despair, my American friends…four years is not forever.

Today may be a sad day but I’m hoping tomorrow and the day after will be better.

Have a good rest of the week, everyone!